Keeping an eye on the red menace.

Avoiding the Looney Bin: A Letter to the American Movement 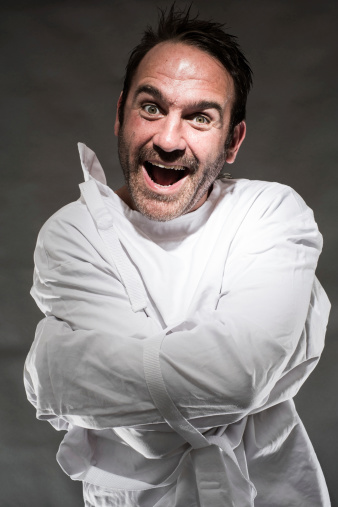 Hello everyone! We are MarxWatch. Our goals are simple. We aim to expose Marxist extremists in America, as well as provide direction for a better right wing movement. We have been around for a little while now, and we have taken stock of the situation. We come here today to discuss one of the biggest issues that plagues the right wing. For the sake of brevity, and being as simple as possible we are going to say some things that might be taken as crass or preachy. We do not wish for anyone to be offended by these things, however they need to be said. Please also keep in mind that if you are offended then it may be due to you falling into this category. Now to the topic at hand:

Do you see the picture that heads this article? See the man in the straight jacket screaming at nothing? Do you wonder what delusions he has going on inside his head? Do you wonder how ridiculous those delusions are? That is what you look like when you purity spiral.

Purity spiraling can take many forms, and it typically depends on the person. From the civnat camp with their Israel flags it comes in the form of proclaiming how much they love that their neighbor down the street happens to be black. From the far right with their Wehrmacht trooper profile pictures, and skull masks it comes in the form of claiming everyone who disagrees with them on anything must be some form of Jewish. Please, for the love of everything holy, stop it. And before you say “well my chat room has 500 people in it, and they all agree with me” just download the image, go into photoshop, and copy/paste the psycho in the picture 500 times to get an accurate representation of what your chat room looks like.

The movement has serious issues when fedposting, and legitimate subversion is ignored, while petty arguments between two people (who have the same underlying principles expressed in different ways) get people excommunicated from spaces. This does not mean you have to be best friends with each other. Feel free to disagree until you are blue in the face. Feel free to also have your own spaces for your ideological camp as well. What this means is that we need to stop making boogeymen out of each other, and start focusing on the real enemy that doxes us, gets us fired from jobs, funds the destruction of our families, etc.

Many make the mistake of believing Antifa is a single group, or gang. Antifa is the Folk Nation of the left wing activist sphere. They are many gangs under one banner, a coalition group. In a single black bloc you could have moderate leftists, communists, anarchists, demsocs, and much more. You can find the same thing on social media sites, as well as Reddit. They all disagree, and will debate among themselves. They even get territorial about things sometimes. Even with all of that, they will come together for a common goal. Check the sidebar of many subreddits and it will say “we are an anarchist group, but please do not bash communists as they are our allies in the fight against fascism!” And do you know what else? These people are well aware of our lack of unity, and they will even heckle us about it. Our enemy is making a mistake by telling us this, and we are dumb enough to interrupt them while they make that mistake.

We do not want this to be too long of a letter, but there is still a lot to say. We have been giving good information in our telegram channel, and will continue to do so. For now, before we close this off, we would like to give a list of suggestions for the people who are anti-Marxists to take into account. We hope you will consider these things, and make a change. We will also divide them into two camps so that there is no confusion as to what is meant for whom, though you can also find ways to apply the advice intended for the other camp to your own if you look hard enough.

Kekistan was funny for about 5 minutes, and now it is just cringe. Yeah we totally tricked the left! Let’s go shadilay in the middle of the highway to own the libs! That’ll show em (this is parody, do not actually do this). After the memes are stale all that is left is the Marxist reaction to them, which is that of calling everything antisemitic. It does not help if everyone thinks the movement is just a joke. Maybe when they line us up against a wall and shoot us you can make an OK sign just in time for the Kommandant to yell “FIRE!”

You are supposed to be America first. What does Israel have to do with it? If you are Jewish that is nice, but it only drives a wedge between you and the rest of the movement. Descendants of the Irish, Italian, Polish, etc. do not carry around their flags, and they should not. You are supposed to be America first. Leave the flag of a foreign nation at home, unless you are visiting from that nation and want it to be known that your nation’s movement supports ours.

America doesn’t care about you half as much as you care about America. The entire point of our activism is to create an America that cares about us just as much as we do it. Please stop dressing up as the founding fathers, it’s not moving anyone who isn’t already on board. Please stop wearing autistic shirts with eagles and flags on them, they look out-of-touch rather than patriotic. Please stop acting like the left not liking America is the worst crime. We are aware they hate America. Stop acting surprised. The normies do not care.

Oh wow! You read a book once! One book! Only one! Jokes aside, you guys really have to learn what optics are. Siegelords as we like to call them here at MW do just as much damage as the Israel-flag-waving, God Bless America crowd, just in the opposite direction. You give the average onlooker the impression that you are the kind of person who will stab them just for the fun of it. That is not the look you want to convey to people if, as many of you say, your philosophy is based in a love of your people. And please ditch the Wehrmacht stuff. You will never convince anyone that you are the good guy with German soldiers, SS bolts, etc. You are actually helping the left by smearing the right with this imagery. In addition to this it makes it ridiculously easy for infiltrators to just go “haha yeah siege was a pretty good book” and then destroy your group once you let them in.

Not Everyone Is A Jew

Just because someone is a little bit more libertarian-leaning than you are does not mean they are sitting in a Mossad office eating latkes. What is important is that when the time comes to get out into the streets for a rally, or to support a cause, that everyone who wants a healthy nation jumps in to support. Stop driving people away with that kind of talk. This is partially to blame for why all of a sudden MAGApedes are carrying Israel flags at every event, and screaming about how they love that their son is half black. You didn’t see that before as much as you do now. It is because they are trying desperately to not be you. Subverters are usually pretty obvious. Stop having conniptions over people who just want to have a conversation. If they shut up when it is time to be serious and get down to business, they are not a subverter. If they fedpost constantly, and divert legitimate conversation to infighting then that is when you kick them out of your space. Do not sit around asking them for their 23 and me results.

Groups that brag about going shooting are prime targets for federal infiltration. Groups that talk about wanting to fight everyone are prime targets for federal infiltration. Sometimes the alphabet boys will even create groups as honeypots. Be careful of groups that go out of their way to aggressively recruit you to join. They may very well just be trying to rope as many people in as possible for a big bust. Do not join groups that openly talk about how they are gearing up for some kind of armed conflict. Groups that repost Antifa tweets and go “Oh yeah? Well let’s fight then!” are not only ridiculous, but also fed magnets. The boys at the office love seeing that. It has “promotion” written all over it. This is a day one lesson that many people seem to ignore. What makes this one frustrating to us here at MW is that we have seen groups that are perfectly legitimate get called feds for absolutely no reason, while clear honeypots, or fed magnets get the two thumbs up treatment.

For the Religious Right

As was said earlier, we wanted to be as blunt as possible. Another goal was also brevity, and this was about as brief as we could make it. Please do not mistake our attempt at humor as talking down to you, or trying to be unnecessarily mean. Please, please, please take this into account. We are losing currently. The main reason we are losing is because of a lack of unity among the right wing. Much of the reason for this is because of the issues listed above. We plan on making more of these write ups in the future to be published wherever we can get them published. ’Til then, thanks for reading.